Elk Lick Creek, a tributary of the Kentucky River, flows through the middle of the sanctuary. Rich in aquatic life, the stream is home to many different kinds of animals such salamanders, frogs, turtles, river otters, fish, and aquatic insects. Along the ravines of Elk Lick Creek are perhaps some of the richest sites in Central Kentucky for wildflowers. Trout lily, Twinleaf, shooting star, celandine poppy, and Virginia bluebells are just a handful of species that are a common sight in early spring.

Elk Lick Falls, the 61-foot waterfall at the junction of Kettle Springs Branch and Falls Creek Branch is of significant interest because it is also one of the largest known surface deposits of tufa in the eastern United States. Tufa is a porous sedimentary rock composed of calcium carbonate, and is more common in areas with karst topography, such as the Inner Bluegrass. Groundwater flowing through seeps and springs becomes mineral laden due to the surrounding limestone. When this water comes to surface and flows over Elk Lick Falls, some of the water evaporates, leaving the calcium carbonate behind. Another geologic feature, the Elk Lick graben, extends through the southeast portion of the preserve. A graben is a depression between two faults and this one is part of the Kentucky River fault zone. It is not known how the Elk Lick area got its name because there are no known salt licks nearby, but some suspect that the Elk Lick graben would have been a probable place for a lick that has since dried up.

Floracliff lies in an area which, according to renowned botanist Lucy Braun, is transitional between Mixed Mesophytic forest to the east and Oak-Hickory forest to the west. The overstory of the gorges along Elk Lick Creek is comprised of sugar maple, bitternut hickory, northern red oak, chinkapin oak, white ash, blue ash, shagbark hickory, Ohio buckeye, and others. Dominant species in the understory are flowering dogwood, ironwood, spicebush, bladdernut, and pawpaw as well as exotic species such as Amur honeysuckle. Most of the upland areas of the preserve, which have been previously logged and farmed, are early to mid-successional forest comprised of eastern red cedar, Osage orange, black cherry, black walnut, white oak, white ash, American elm, and honey locust. Chinkapin oaks dating to the 1600s remain on the south-west facing slopes through the sanctuary. A limestone outcrop on the uplands provides habitat for Malvastrum hispidum, or hispid false mallow, which is a state threatened species. Other species common in the rock outcrop are eastern red cedar, redbud, dwarf hackberry, prickly pear, and false pennyroyal. Along the Kentucky River portion of the preserve is a floodplain where silver maple, sycamore, and box elder dominate.

The various plant communities and aquatic habitats at Floracliff are home to a wide diversity of plants and animals. Learn more: 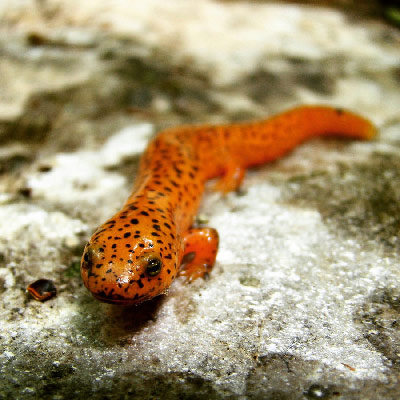 by Neil Pederson
Old-growth forests are a rare element in the Inner Bluegrass Region. So, it was a great delight when old trees were discovered at Floracliff.